by Hennry Prince 1 week ago1 week ago

Anyone watching the Donald Trump administration tries and sab-otage its recently lost election knows the team is falling apart. 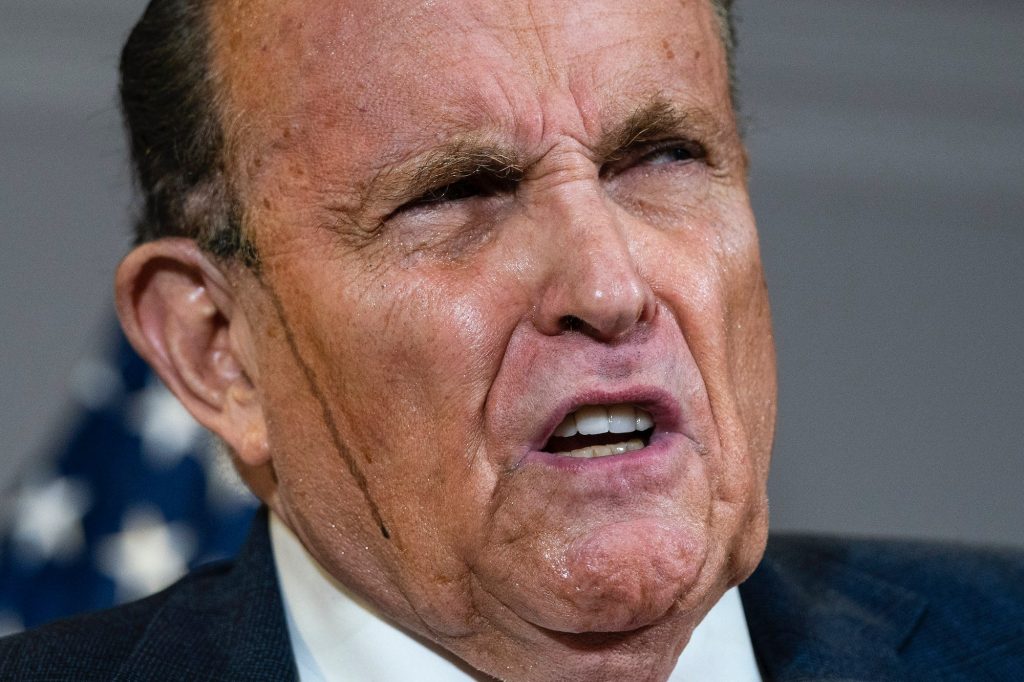 But even in a world where head lawyer Rudy Giuliani is willing to show God and everybody that he hasn’t ha-unted a courtroom in decades, nobody expected the coming apart to be so literal. 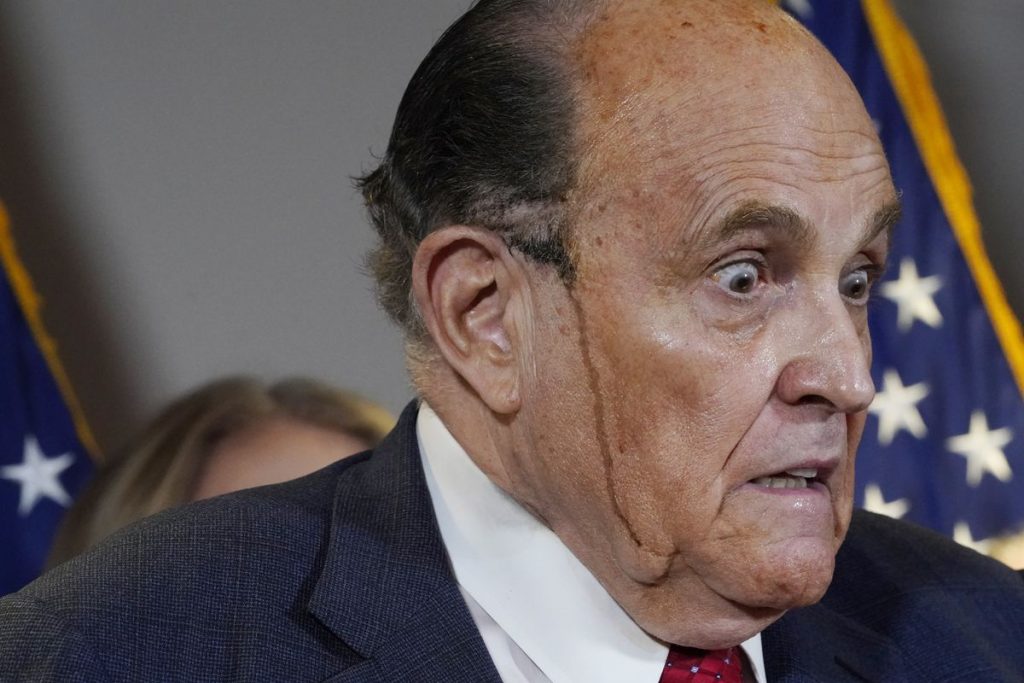 Giuliani gave a news conference to talk about the status of Trump’s bid to have the election thrown out by the courts, but all people could focus on was the fact that his profuse sweating was causing his hair dye to run down his face. 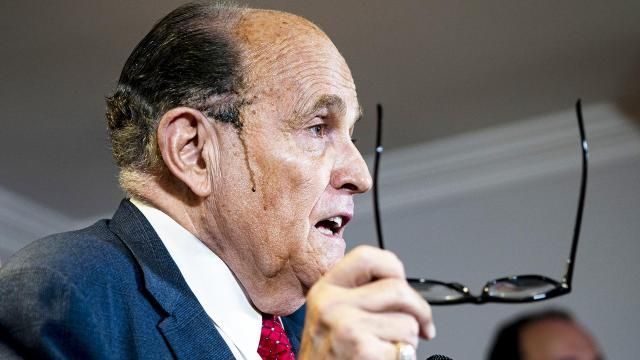 As the former mayor of New York City spewed baseless all*gations of voter fra-ud in key states (and acted out a scene from My Cousin Vinny), Twitter fixated on the brown goo rolling down the sides of his head.

It appears that Rudy Giuliani is sweating through his hair dye. pic.twitter.com/OY3dGL1BtX

Users on the platform po-unced, presumably because you don’t tend to see Naz!s melting outside of Ra!ders of Lost Ark. It might be a bit of a “laughing to keep from cr-ying” moment, as the Trump administration is actually attempting to have the election results invalidated with the help of a conservative judiciary. 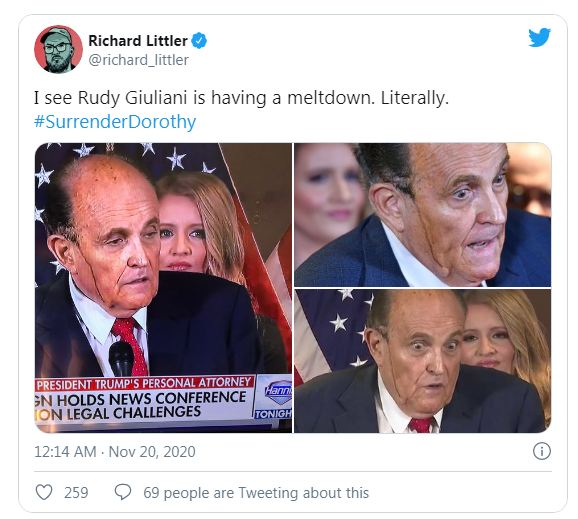 Though they haven’t been successful in their judicial coup, they’re far from out of options. As pointed out by CNN, Giuliani’s bizarre press conference was full of misinformation and outright lies. The former NYC mayor reiterated baseless cla!ms about widespread voter fra-ud and irregularities, specifically pointing to the recent incident in Michigan’s Wayne County.

Giuliani told reporters the Trump campaign successfully got the county’s board of elections to decertify the election results due to “overvotes”; however, the board members ultimately voted to certify the results after an initial de-adlock. According to the network, the so-called “overvotes” are more commonly referred to as “imbalances,” which occur when the number of recorded ballots in the poll books do not match the number of cast ballots.

Michigan Secretary of State Jocelyn Benson said these types of d!screpancies are not unprecedented: “They certified the vote in 2016 with 80 percent of Detroit precincts out of balance. And yet today, 42 percent were out of balance and yet it didn’t get certified, so clearly there is no valid point here,” Benson previously said.

Giuliani also said mail-in ballots were “prone to fra-ud,” a cla!m that experts have consistently ref-uted. He then turned his direction toward Pennsylvania, one of the several ba-ttleground states that went to president-elect Joe Biden. Giuliani said 682,770 ballots in Pennsylvania “weren’t inspected, which renders them ballots that are null and vo!d.” 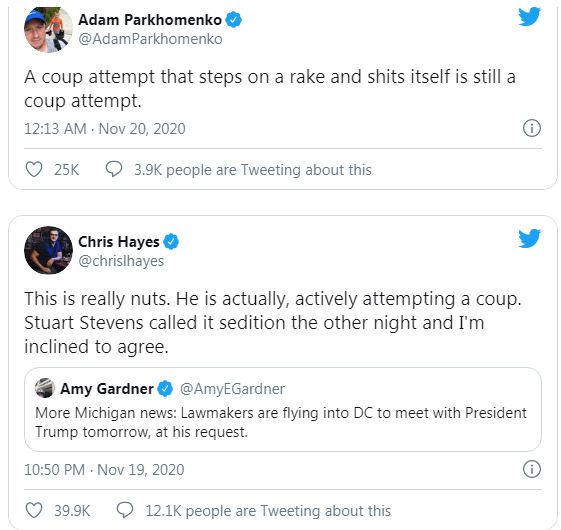 A Pennsylvania Supreme Court reje-cted the argument earlier this week when it threw out the Trump campaign’s complaint regarding observers at ballot-counting sites. The court determined the observers in Philadelphia were given proper access to watch the vote tallies; however, the court ruled that it is up to county election officials to determine the minimal distance between the observers and ballot counters. 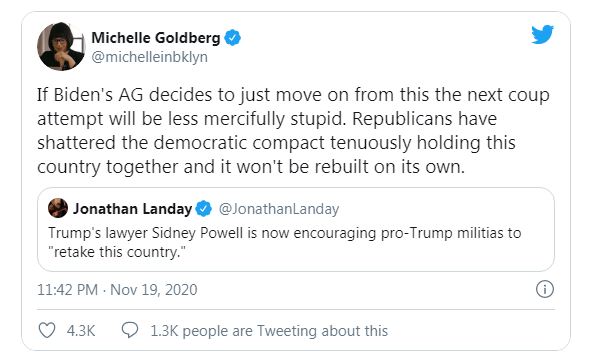 On Thursday news also arrived that Trump’s campaign will drop its last remaining Michigan lawsu!t pertaining to the election because, as Bloomberg writes, “it succeeded in ha-lting certification of election results in Detroit and surrounding Wayne County.”

This Article First Published On COMPLEX